Coco and June finally be together forever at the rainbow bridge. I never regret to have both of you as

my pets and to be more precise, as my furry frens..

I will temporarily stop to blog at CocoJune blog until i am courage enough to have bunny again. 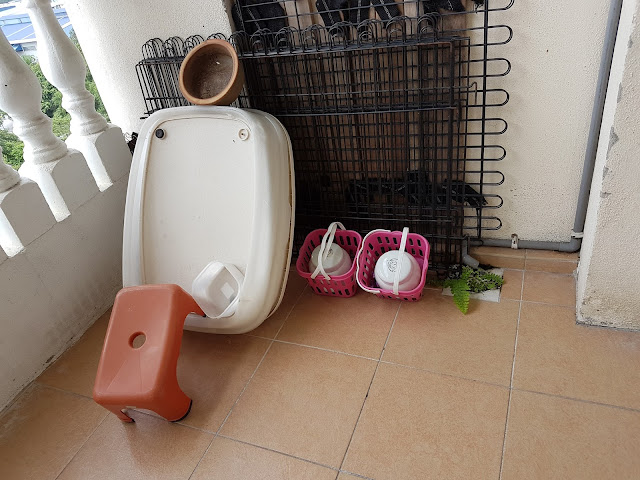 My June left me on 24 July 2014, it was Thursday morning, around 6.30am. I know that June was an old bunny, 7 good years with me, but i still can not help to feel the loss. June did not suffer much, just being an old bunny, she started to be some how disoriented, pee and poo everywhere, diarrhea and stop eating for two days. June was still warm when she left me. June was at the rainbow bridge now, free from suffering and sickness, parting on earth is just temporarily and i know that we will meet again,... 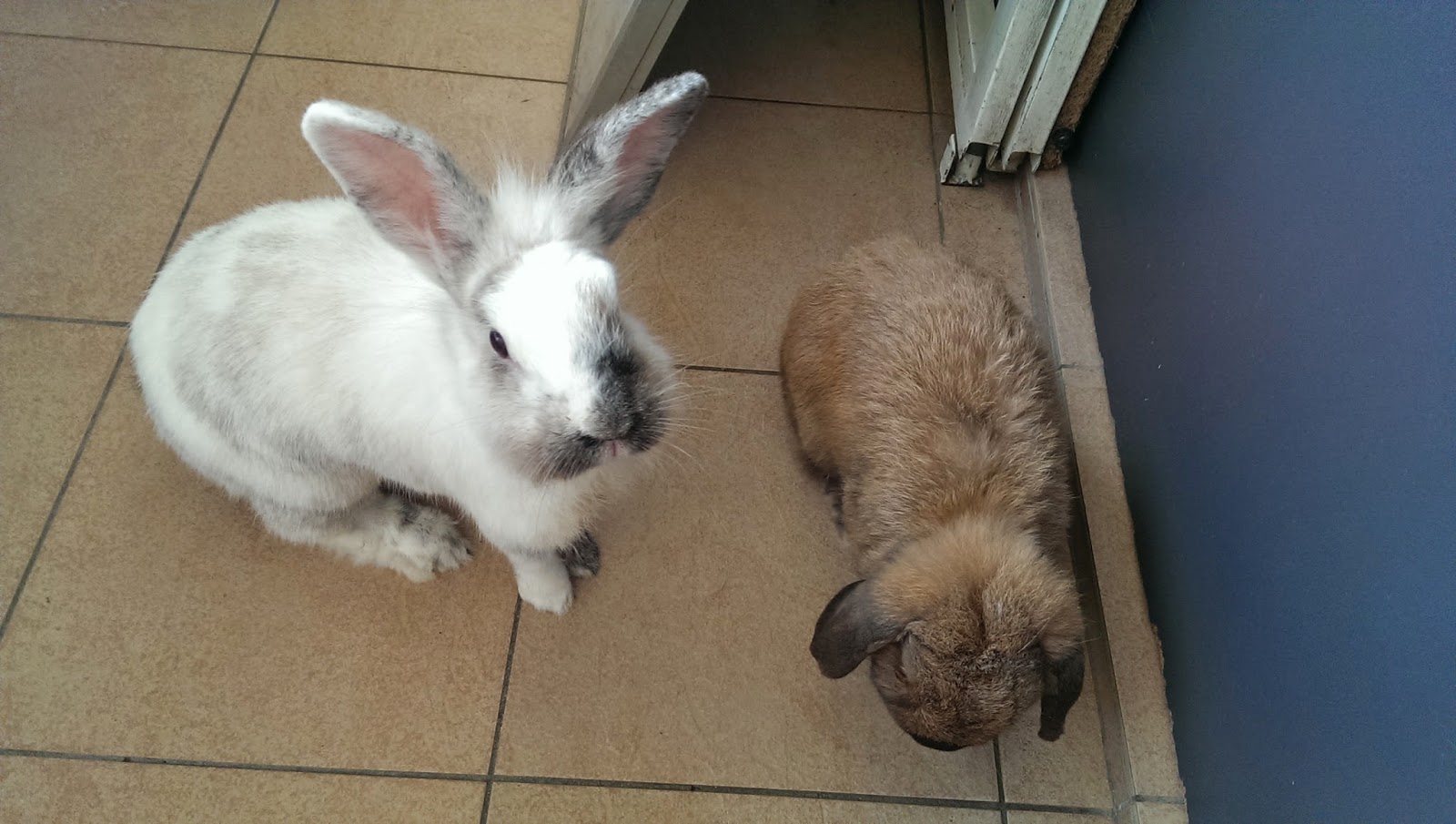 June was always a good companion, constantly beside Coco 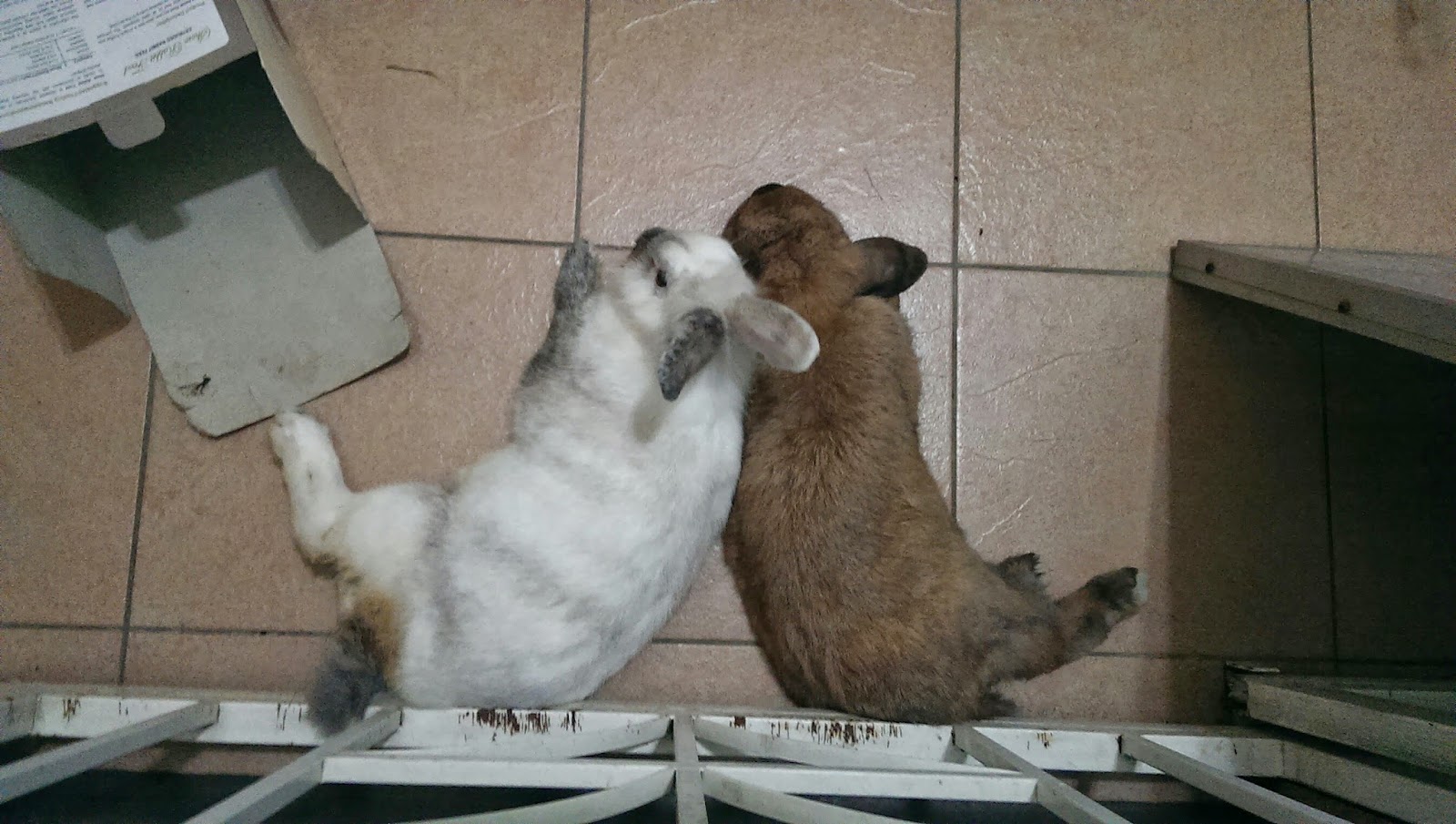 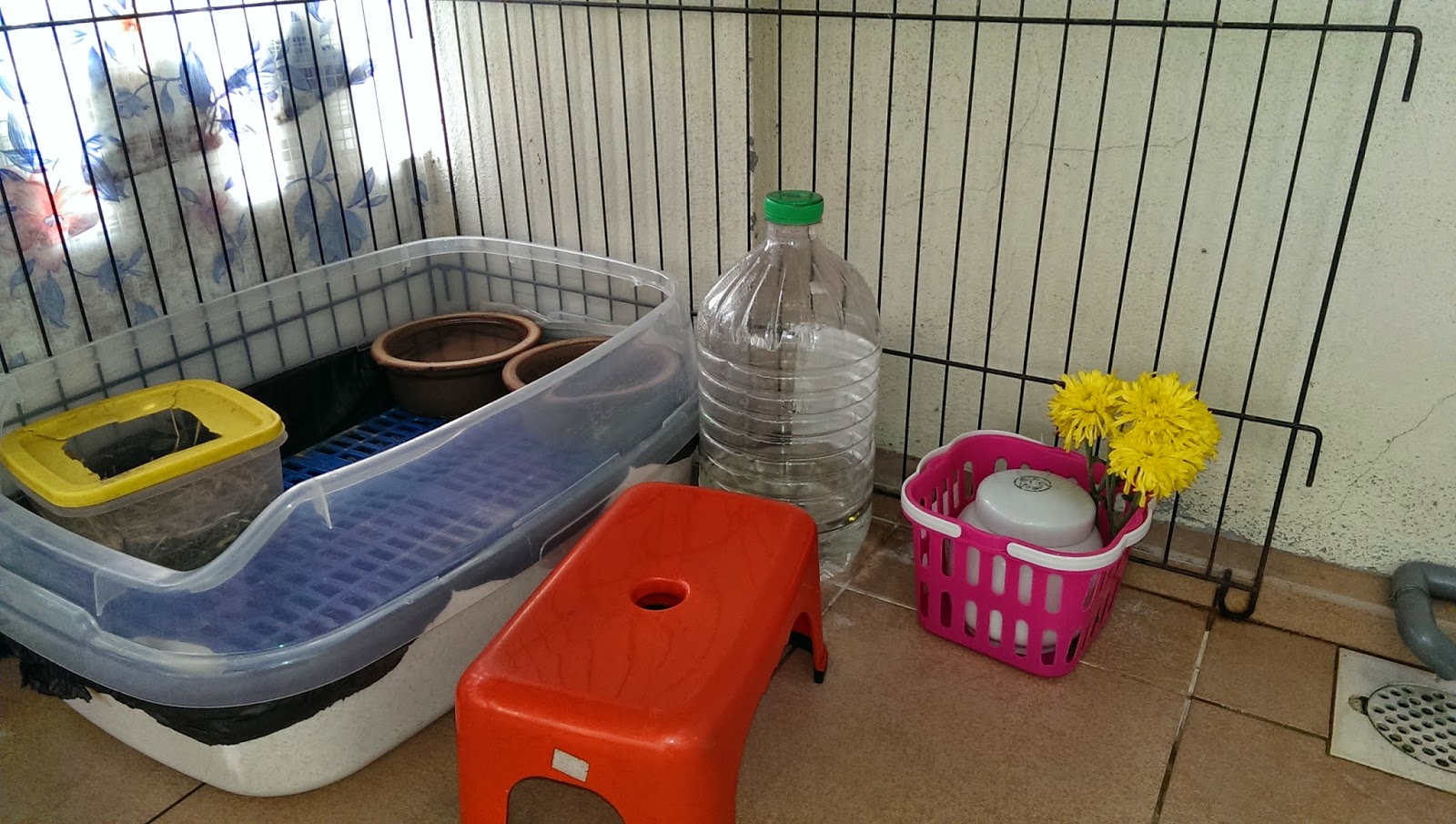 I know that June always with me 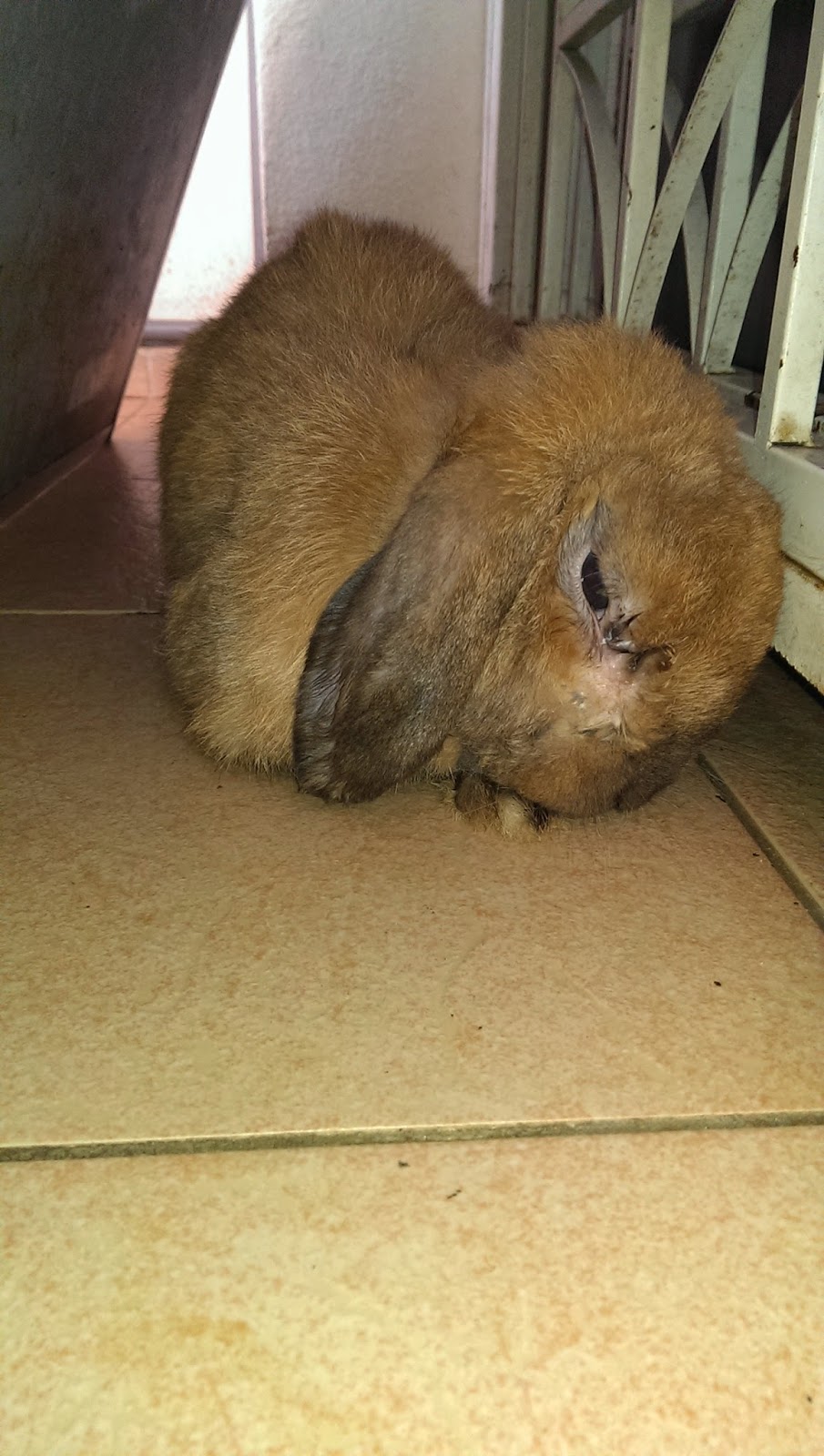 Coco feels the loss too 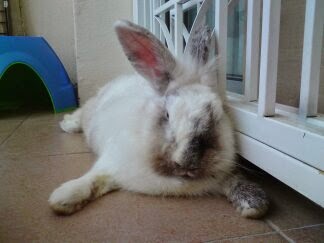 I am going to miss June every day 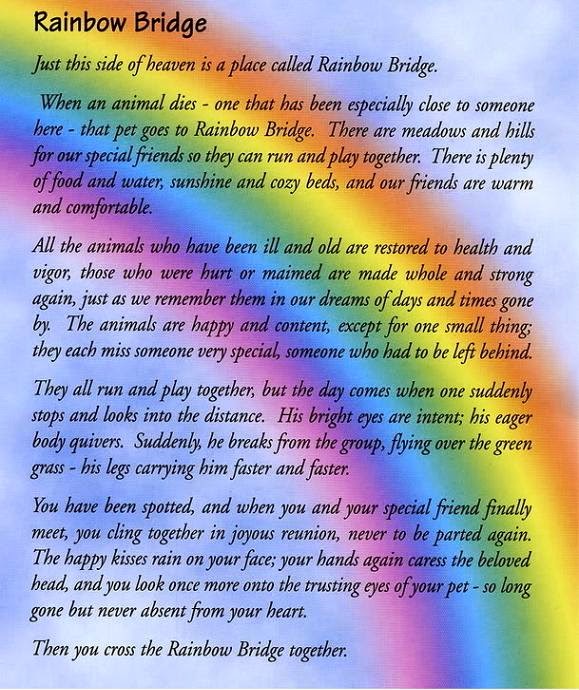 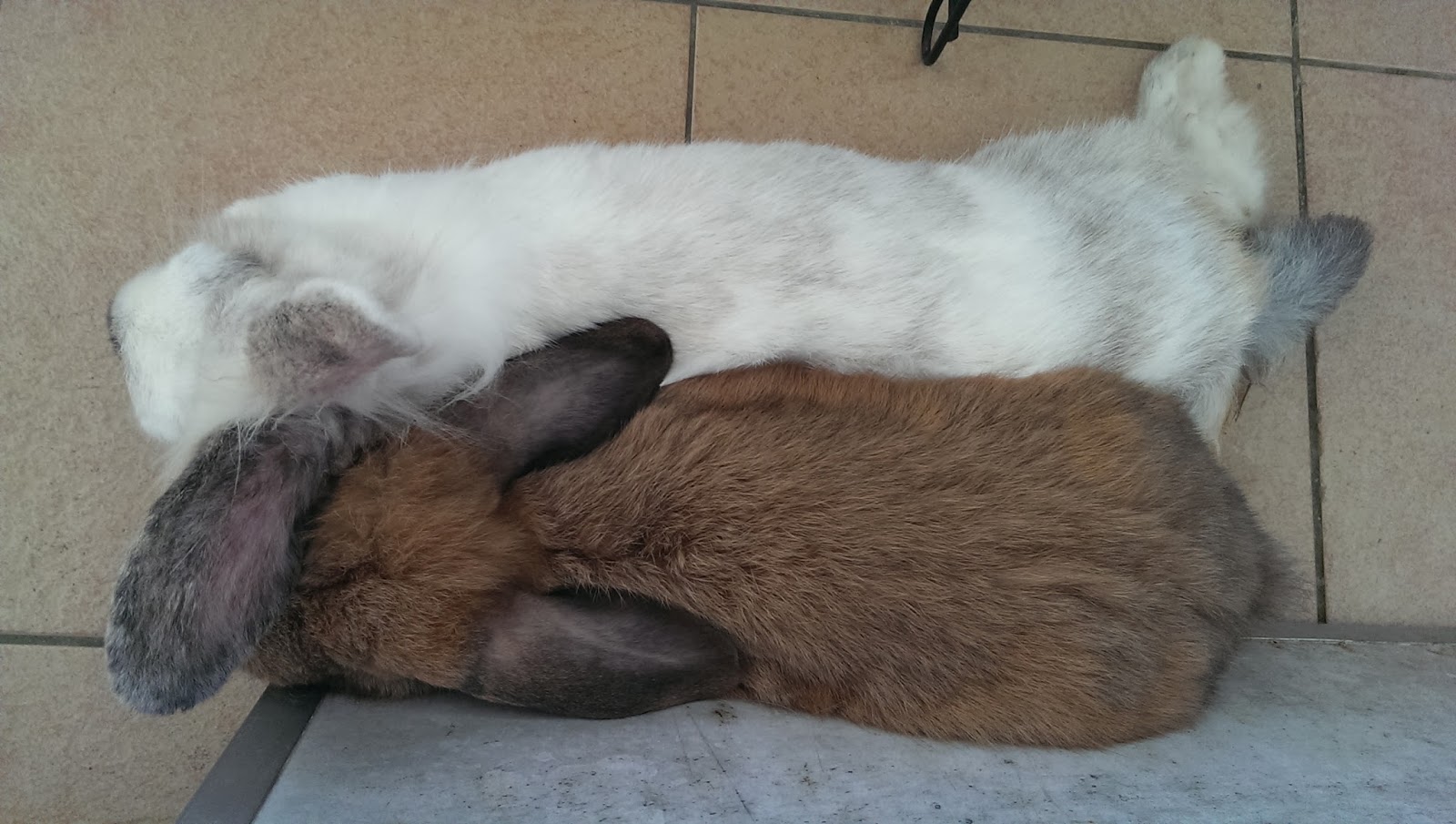 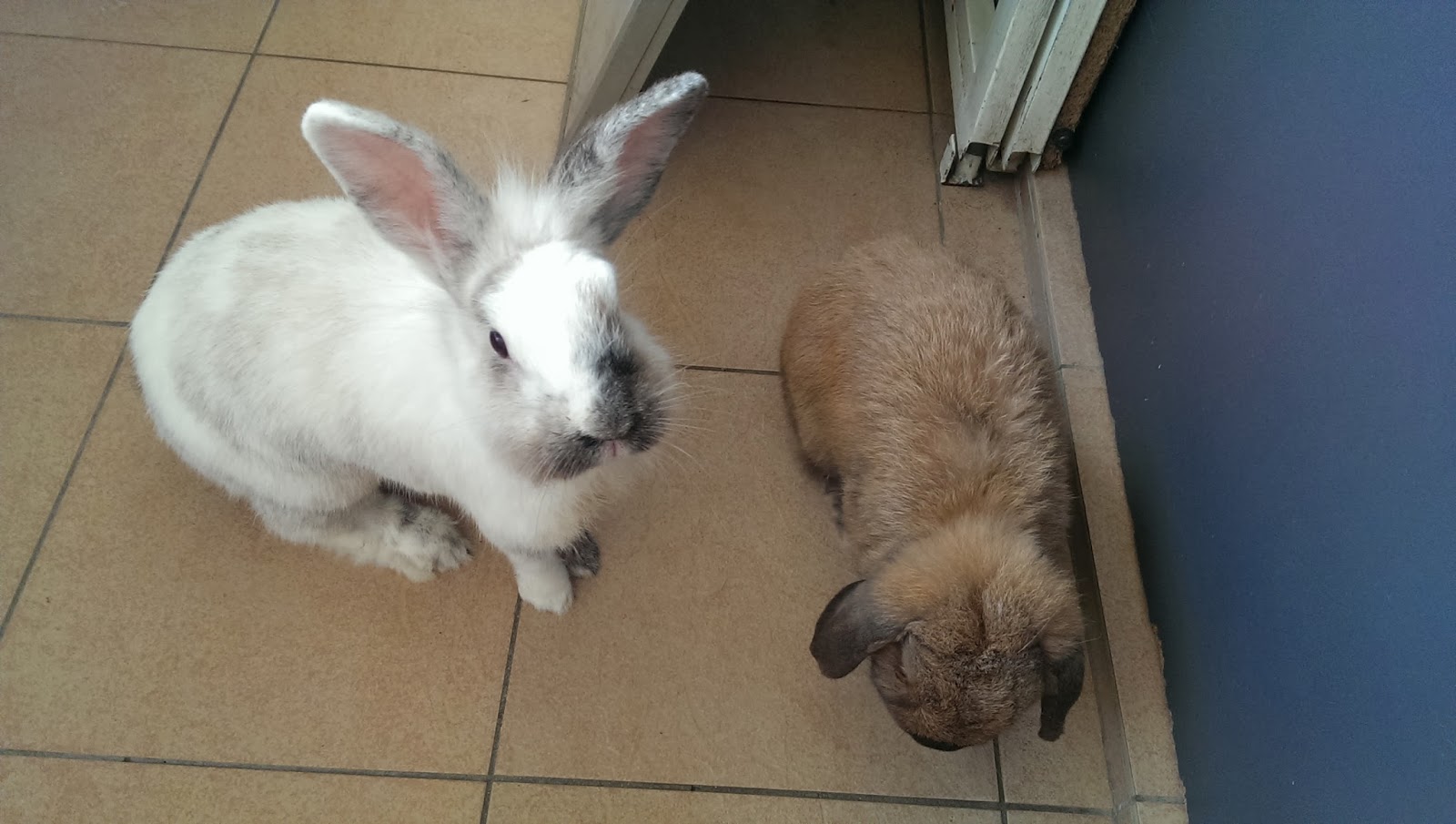 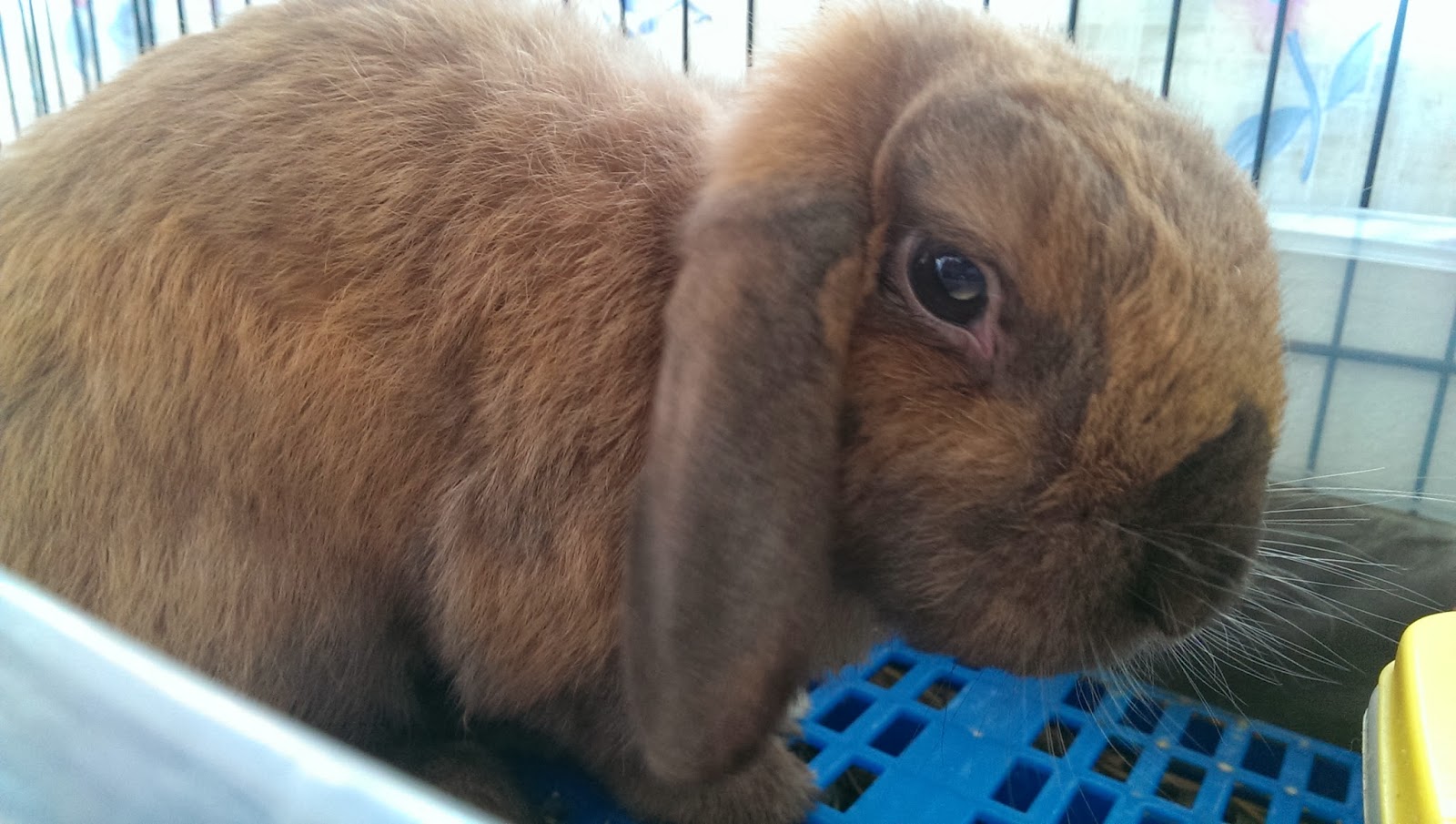 Thank God for bringing Coco and June save and healthy through 2013 !
Posted by cocojune at 5:24 AM No comments:

These photos of my love buns Coco and June were posted upon the request of one of my animal lover fren named Nicole. So, Nicole, these are for you !!! 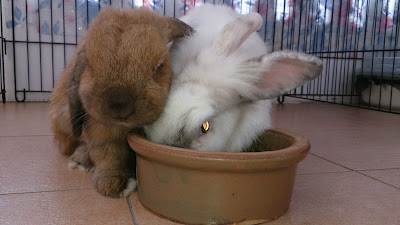 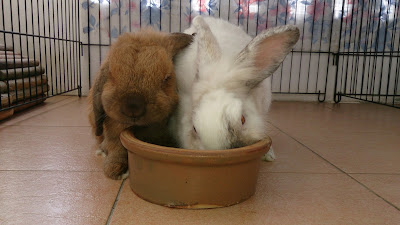 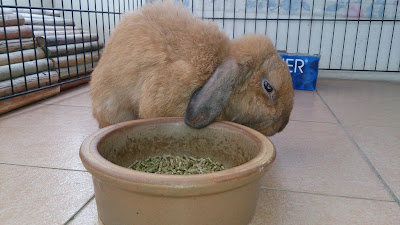 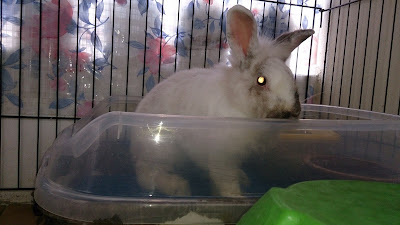 I am so glad that Brave was adopted today ! by two young and beautiful ladies, Agnes and Michelle (with spectacle). Agnes came across Brave's story through Second Chance's facebook. I am also glad that Agnes and her family  are experienced in handling cat. Why i said this was because Brave tried  to escape when i was talking to Michelle (Agnes's sister) at the car park. Brave hide under the car and i got so panic, but Michelle managed to grab Brave which cling at one of the car tyres. Michelle told me that normally cat has no where to hide under the car except the tyres. I learned something new today, Thank Michelle.  Agnes and family currently have one 8 years old cat at home and hope that Brave can get along with this cat.

I am hereby would like to thank Mun Ee, our Second Chance's volunteer to help me to follow up with Agnes, Dr. Chan Kah Yein and Puan Hanie in helping me to blog about Brave. Thanks Agnes in giving Brave a good and loving home and i know that Brave is in good hand. 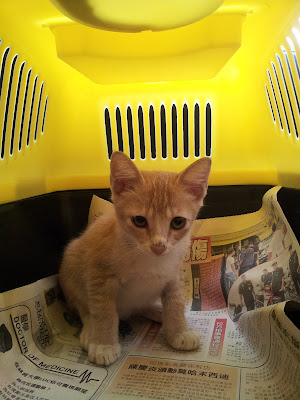 I have defeated this deadly cat virus that infected me ten days ago, look at my eyes, isn't it good enough to convince you that i am a real fighter ? 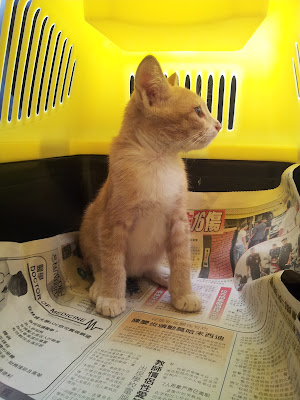 Is my adopter coming soon ? 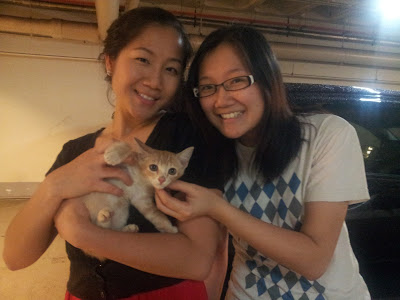 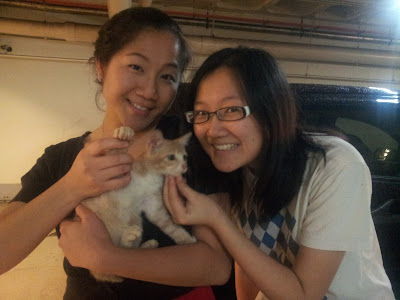 My beautiful adopters, Agnes and Michelle
Posted by cocojune at 8:19 AM No comments:

Dear readers,
Today's blog topic, i am diverting it to a cat story which inspire me so much.

I am actually urgently looking for a fosterer or adopter for this strong and beautiful orange cat. As such, i sincerely hope that you can help me to spread the news.

This kitten which I named him Brave, was infected by virus, in layman term, he is a parvo cat, i did check with the vet the name of this cat virus, but it was too long for me to remember and finally the vet told me that this kind of virus is something like those parvo virus which infected dog :p.  I rescue Brave on last Friday, he was lying lifeless under the dark staircase of my condo. I guess Brave was not meant to end his life there, he managed to meow softly which somehow caught my attention. i quickly picked him up and was shock to see that Brave was so skinny and barely can walk. Brave's body was so cold and his eyes was half opened. Without any hesitation, I used a thick tower to wrap him up  immediately and try to hand feed him with some wetfood, but, he refused to eat, feed him with some milk and water, he refused to drink, Brave was simply too weak to eat and drink.

That night, Brave was just lying and closed his eyes with heavy breath and i thought that he might not be able to make it to the next day. However, in the middle of the night, i heard a soft meow, it was Brave ! he was meowing to me ! he managed to raise up his little head eventhough he still could not stand up and walk. Immediately, i fed him some milk and water and he drank ! i monitored Brave's condition throughout the night (he was having severe diarrhea as well) and rushed him to the vet, Dr. Tan (2nd chance panel vet) the next morning. Dr. Tan said by looking at Brave terrible condition and based on her experience, normally kitten infected with this kind of virus and with such a low body temperature as well as severe diarrhea, Brave has a very low chance to survive. Brave was hospitalised and continue to be monitored and i, already prepared to receive call from Dr. Tan anytime about the bad news on Brave, However, Brave has such a strong will to survive, he began to perk up next day, he can stand up and walk and he started to eat and drink by himself !

Yesterday, i dropped by the clinic and Dr. Tan said that Brave temperature goes back to normal, eventhough still have a bit of diarrhea. Brave not only eat and drink by himself, he even walk out from the cage and greet me with a loud meow ! After a while, he started to groom himself ! What a joy!  So, this is a wonderful and happy story about Brave and i hope that someone can foster Brave or better still, adopt him !  because Brave is definitely deserved to be loved, isn't he ?  I attached some of his photo and hope that someone is kind enough to foster him. if he is not adopted, at least he is under the good hand of the fosterer and until the time that he is totally recover and strong enough, i have to put Brave back to his colony. i hope Brave is fit and strong enough to be a community cat at my condo. Brave is really a miracle to me, he really want to survive and he does ! Try to look at the picture that i attached, his eyes is full of fighting spirit.......... 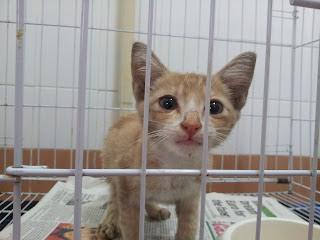 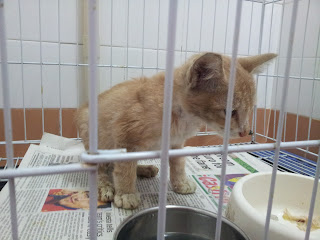 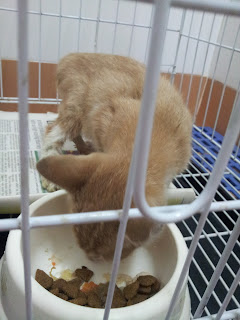 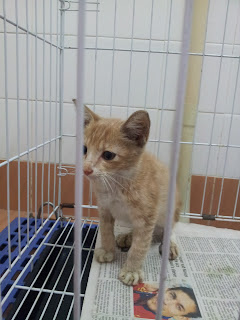 Posted by cocojune at 8:32 PM No comments: 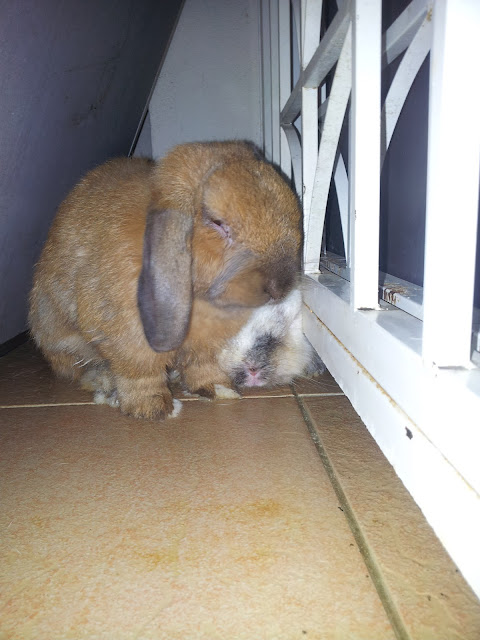 "i do not expect you to wake us up so early in the morning to have our breakfast .."
Posted by cocojune at 9:45 PM No comments: 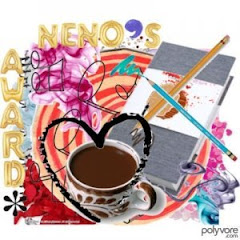 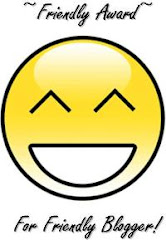